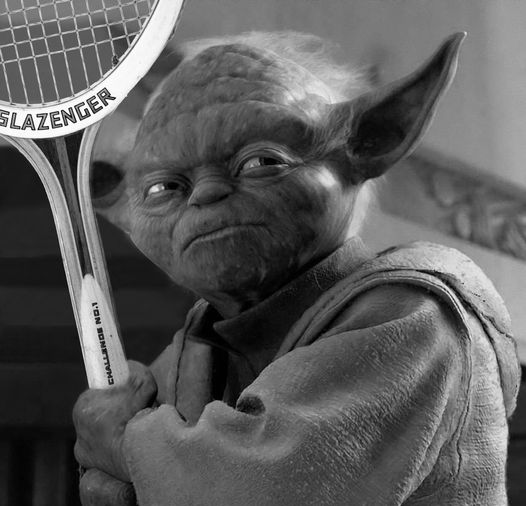 Schooled by a Pipe Smoking Yoda

There are some tennis memories that are burned on my mind, branded and permanent and they will never leave me. One for example, is watching a Borg McEnroe Wimbledon final, one saving up to buy my first second hand Donnay Borg Pro and then one is Susan Molyneux’s legs (sorry for that one but it was a big motivation for me to play in my early years, she was 14 I was 13 and too shy to even speak to her. She was a vision!) Another is this one!

At 14 I had hit a million balls against the wall already, read my Bjorn Borg’s My Guide to Tennis until the page corners were tattered and browned, and ascended to the pinnacle for any floppy haired teenager, a place in the men’s second team! It actually was a big deal and a history maker for the club, myself and my 15 year old partner, Peter were the young guns and good enough to be officially tolerated!

Our first match was to be an adventure, an away match at a little grass court club, in the deepest darkest corner of the Kent countryside! As we pulled our cherished arsenal of weapons from the trunk of the car, mine two much loved Donnay Borg Pros and Peter’s Prince Pros we looked across at the courts to see some elder statesmen warming up. We crossed the field to the courts sharing some sniggers and juvenile jokes which in themselves should have been enough to predict what was coming.

I don’t remember the names of the two players we faced that day! I only remember that both had more than sixty years experience on this planet, and probably quite a lot of it has been spent on that court! Both wore all white clothing, dunlop green flash, vintage tennis caps the style of which no longer can be found, and one squinted through rectangular eye glasses. Their shorts descended to the top of their knees and their socks extended upwards to the bottom of their knees. Those knees still haunt me, like four pink walnuts mocking me, but one thing has left more of an emotional scar! The player with the glasses had a another facial accessory. During the warm up he chewed on a pipe! It gave him an air of old country gent but more importantly it grated on me! When the warm up was over I was relieved to see him stumble to his bag to put it away, except he didn’t! Instead he stacked it with Golden Virginia, lit it and took a long draw! “Puff or Smooth” he called as he spun his Slazenger Challenge No.1, surrounded by a cloud of smoke. Did he say Puff or Rough!? Wow he was playing with my mind already!

The next hour and ten minutes was a doubles Yoda masterclass in slicing and dicing. Their weapons may have been out of a book never to be written but they knew every divot, every blade of grass on this court and they could hit them with pin point accuracy! They didn’t hit hard, they were never out of position and despite our perfect technique and youthful legs (theirs bowed but still seemed to carry them to exactly the right point in time to meet the ball) we got schooled!

On the car journey back I tried to make sense of the pain, as Peter and I sat silently in back of the Morris Minor that was now charged as our vehicle of salvation. It was bad enough to lose love and one to Popeye’s great grandfather but to have each point proclaimed with a puff in between was excruciating. With a royal plumb deep in his mouth he announced Fifteen puff Love, and even threw in the phrase old chaps now and again. His voice bounced around my head a reminder, a tormentor, a reality check!

Our team captain, a passenger in the front seat, pivoted back! “Those guys are tough” he said “They know how to play the game!” And there is was, a bolt of lightning from the tennis gods, as if the clouds had opened to a heavenly chorus and Borg himself had spoken! We had hit, we had drilled, our strokes were grooved but we didn’t know how to play, to adapt! It wasn’t just that grasscourt which had so many hills and bumps that Julie Andrews could have coming running over to the opening of the sound of music! Adapt to them, counter them, how could it be that we had totally and completely missed the point of tennis!

That was May 1982, but I can still smell the grass and see the faces of Yoda and Obi wan! I’m not bitter! Well not much!

It may be 38 years ago but as a coach it still it reminds me that why must always come before how, and ironically now more than ever, as we now live in the world of why! A child of today doesn’t just get information from us but from a myriad of sources, they have options and can choose their virtual guru if their don’t like our message. It has never been more important to teach the game first! And the game was what they guys knew how to play! It’s why we chose the title for our conference www.itsmygame.net. Playing is not just a way of creating purpose for learning but a release into an adventure that allows us to develop reasoning, and both cognitive and emotional skills.

I am sure that both of the legends that schooled us on that day won’t recall the match, the score or even that I was sporting a completely matching FILA ensemble from head to toe, as they look down from tennis heaven! But I do and I am grateful, it shaped my mind and my desire to play!

In this new world I hope we can take this opportunity to create more play in our programs, be less judgmental, restart the tape and find better ways to inspire young players! The virus has changed peoples needs and values so let’s avoid endless lessons and make tennis the sport that brings wonderful, and sometimes frustrating emotions, back to a child’s life! It may not always look as perfect as we want it to and not every child may step on the court with the passion we have but when you focus on play and not just on learning the world has a habit of finding a way!

Thanks so much to Yoda and his partner! I am off to find those long shorts, my knees are not what they once were!