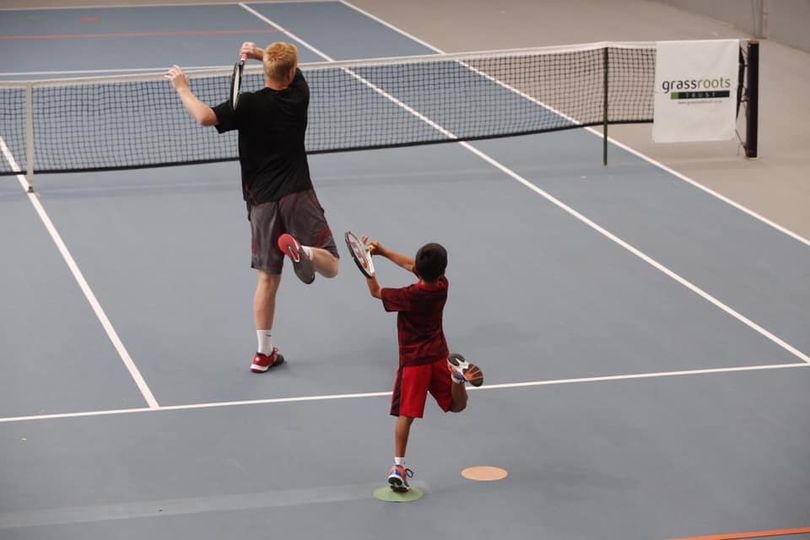 Is it a flaw or just a mistake?

I was a national champion swimmer as a junior and technique was very important as in swimming which is closed skill sport, your success as an athlete hinges on how efficiently you can move through the water. Air is 784 times less dense than water and requires an entirely different set of technical skills than any other land-based sport. For this reason, any flaw in form is magnified exponentially in the water.

Tennis being an open skilled sport requires many skills and techniques. There are the fundamental tennis technical skills that every beginner player should acquire but these skills needs to be adaptable and relevant to the game of tennis so as the player matures they can learn more advanced skills. Honing in on your technique is a great way to reach your potential in tennis as it can drastically improve your efficiency, speed, consistency and confidence on the court.

However during a coaching session it’s important to identify if what we see is a flaw or a mistake. Are we jumping in too soon and preventing the child from correcting their own mistakes and assuming there is a lack of skill, when actually it could just be a matter of application, time or understanding? (competence). Are we taking away the students opportunity to correct their own mistake and take responsibility for their own tennis and their own learning? (autonomy). Are we being too fussy and not working towards the player’s wants and needs, and is what we are working on aligned to clear goals which the player owns and which are agreed between player and coach? (purpose)

It is worth pointing out that this article focusses on technical aspects of the game, and that we recognise that flaws could also be personality traits or psychological/mental weaknesses which can have an adverse effect on the player’s training or competitive mind, decision making or attitudes to the events which occur in matches or the life of a tennis player.

Examples of a flaw

– A fundamental breakdown due to lack of physical, coordinative or technical efficiency, which if uncorrected, is likely to remain or even become worse over time. It could lead to injury or to a permanent weakness in the player’s game. A flaw is likely to need the intervention of an expert (coach) to correct it
– Lack of motor skills competence
– Over complicated swing
– Unnecessary movements in the swing
– Lack of adaptability
– Lack of coordination in the kinetic chain
– Grips

Examples of a mistake

– A mistake could be a one off, a temporary or a permanent feature of a player’s game, which could be a wrong decision in the heat of the moment, or due to a more fundamental lack of understanding by the player
– Lack of ownership
– Not enough repetition of the skill
– Not understanding the purpose of the exercise
– Misjudgment of the situation or shot
– Concentration
– Tiredness

Flaws are often quite easy to spot if you know your player well, or if you regularly analyse or chart their matches, because it is likely that a pattern of evidence will emerge over time which becomes a feature of their game. For example, analysis might show a weakness in consistency or effectiveness due to an extreme grip when a player is forced out wide on the forehand. Evidence will probably show a higher than expected number of lost points resulting from that shot. Such a flaw can sometimes be predicted by others, including the opponent! Mistakes, however, are less likely to show in a pattern, are more likely to be random and cannot be predicted, to such an extent that we sometimes hear advice suggesting that the player should wait for a mistake.

So now that we understand the difference, what do we do about them? How can we train in such a way to reduce mistakes or flaws in a game?

What recommendations can we make in coach behavior best deal with mistakes and flaws?

Coaches can help players understand and deal with mistakes in training by:

1. Understanding if it really is a mistake or a flaw!
2. Understanding that mistakes happen. Even the pros make them, and no child should ever be criticised for making mistakes. However, it is important to understand why mistakes happen, and to help players become resilient to the challenges of competitive tennis so that they make fewer mistakes as they gain experience. Make sure that parents of your young players understand this too!
3. Encouraging players to try to play their best and to try to win, rather to try not to lose. By being brave and by trying new things, players develop their game skills, learn more about themselves and their game, and eventually accept mistakes as part of learning. Better to try and fail than not to try at all!
4. Practising decision making in training. Start with simple either/or choices with young children, and gradually extend the range of options as players gain experience. Challenge and discuss decisions players make in training, not only when they make wrong decisions but also when they make right decisions, so that they can talk about their decisions
5. Develop little routines to deal with mistakes on court. The key is acceptance, not to dwell on the mistake and to move on quickly

Coaches can help eradicate flaws in training by:

1. Understanding if it really is a flaw or a mistake!
2. Watching players in matches. Many flaws may not come out until players are under competitive pressure
3. Have a clear analysis checklist so that you can go through a clear process to understand why the flaw exists, and to avoid reacting randomly to every error which happens. Remember that flaws aren’t just technical, and many technical flaws could originate in the incoming ball and not necessarily with the outgoing ball
4. Video analysis. As players improve it can become hard to see the little details
5. Getting a second opinion. Do you know another coach whom you trust and who can maybe cast their eye over your player. It can be really helpful to get a second opinion when you aren’t 100% sure of something

Tag: 10 and under tennis   competition   Evolve9   It's My Game II Conference   Tennis Learning
Share:
Previous Next