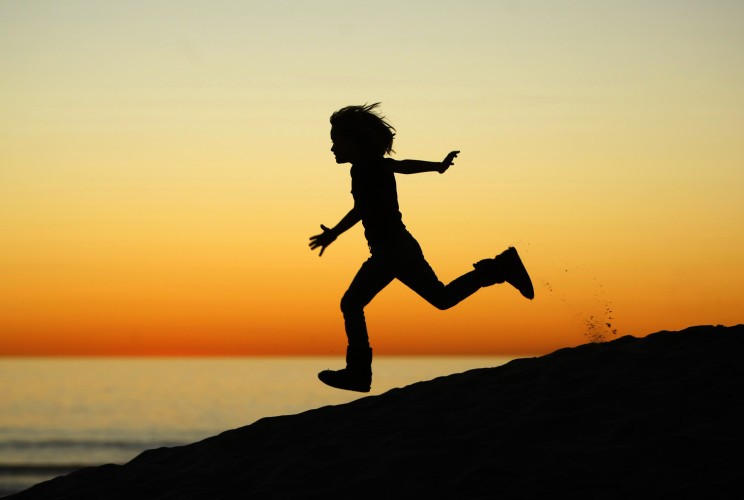 She was seven and fast! I mean so fast your hair flew up when she ran by and I am sure I heard a whooshing noise. Her legs were a whirl like a roadrunner cartoon and no one got anywhere close to her! So I wasn’t surprised when on sports day they made her race with the older kids!
But something was a little different this time. Sure she was only seven but she had medals dangling from her bedpost already and when I inquired, the night before if she was excited about running she made an “ehhh” noise and disengaged from the conversation.
So now she was lined up on the starting line while a rotund and slightly tyrannical headmistress commanded her “children” to stay behind the line. The shining whistle in her mouth only exaggerated the tightly pursed lips as she prepared to exhale with such a precise snap that only the shrillness of her voice would have made you stand to attention more abruptly!
The note came as acutely as expected and the kids made their way up the track! Some staggered, some puffed and one or two flew! A stampede of styles, like a mass exit from a jungle blaze. About half way up my young gazelle started looking back over her left at a red faced pursuer, named Eric. One glance, then two and then a fixed glare. I am not sure what took more athletic prowess, winning against the older kids or staying in lane without looking.
She broke the tape and turned and strolled nonchalantly in my direction! “Wow you won, well done!” was followed by a “Thanks Dad and a hug!” And within two minutes she was twittering with her friends. Eric’s face was still negotiating its way back from purple to red, hoping to soon separate the freckles that had clustered as a result of his exertion.
On the short car ride home she sat in the back while the medal had found a new home on the front passenger seat! “Can I ask one thing about today?” I had wanted to ask this earlier but I had decided that conversation was not on the agenda! “Yep!” she replied without looking up! “Why did you keep looking over your shoulder?”
“C’mon Dad, don’t you know about racing?” I knew I was about to be told how the world works, and not for the first time! “All you have to do to win is beat the kid coming second!” As we exited the car I quizzically asked, “So are you telling me you didn’t just run you fastest?”
“No need, Eric isn’t really that fast! Can we have pizza for dinner?”
In a jungle there is always a tallest tree! It’s rarely on the edge but usually deep in the labyrinth competing for light and water. It grew tall because it grew with others around it! The environment (and some good genetics) made it so! Other trees came close to it, and sometimes their branches pushed against it and rarely did the sapling that it once was, show signs of the potential to reach the summit that it has, but thanks to the other runners in the race it did!
When we look at our role and responsibility as coaches and mentors was need to consider that we are not only obligated to that one tree, that one superstar that we think has IT! We must develop and support red faced Eric who grimaced his way up the track, and the girl in third whose pig tails circled like copter rotors as she pushed him along. Building environments where everyone is appreciated and challenged benefits all, it creates a jungle that pushes to the light together!
Building better places to play is not about participation vs performance, it is about understanding that when you build the right jungle you get both! This is a key part of our event next month.
Join the Conversation at the It’s My Game Conference May 20th – 23rd 2021. Register now at www.itsmygame.net.
Tag: 10 and under tennis   Evolve9   It's My Game II Conference   kids tennis   Tennis Development
Share:
Previous Next